Halloween. Because I'm In Too Deep of a Sugar Low to be Creative.

I didn't take any photos of my kids this Halloween.  The first year they were here, I took a bunch of pictures BOTH times they carved pumpkins, and then of course of their costumes and their first trick-or-treating experience.  Last year we got a quick photo as we headed out the door, then a couple more as they sorted out their loot on the kitchen floor.  This year Oak did ask me to film him carving his pumpkin, because he was trying to make a "how to" video (since, you know, people don't know how to carve pumpkins...?), but I didn't get a single shot of them in costume.

I was feeling mild guilt about this, and then I thought--how many pictures do we have from Halloween when I was a kid?  I can think of one black-and-white shot of my mom and sisters lounging across my parents bed admiring me as I pose in my princess outfit--one of my mom's old nighties and a cardboard cone hat with lace trailing off the top.  (This also explains my deep seated prejudice against spending money on Halloween costumes.)  The only other picture from my early Halloween's is one of me at age 4 dressed as, I shit you not, a geisha girl.  There are so many layers of wrong to this costume.  I realize that geishas aren't necessarily prostitutes, but there is that connotation, which I'm sure my parents were aware of, right?  Then there is the whole, "Hey, I'm going to be Japanese for Halloween" aspect, which is so culturally inappropriate and offensive.  But I remember clearly how delighted I was that the black wig hid all my hair, and the face paint disguised my face, so that all the neighbors declared they had NO IDEA who I was.  Now that I'm no longer four, I suspect that between the fact that I was one of the only little kids on the street and that I would have been with my dad or sisters, people probably did know who I was.  But when you're little, being in costume makes you feel transformed.

This year my kids were a zombie and a vampire.  We took our 15 year old neighbor, who just immigrated from Iran last summer, with us.  He had an black and red belled jester costume, horrifying skeleton mask, and a fake ax.  True to family form, my kids were wearing some face paint and half-assed homemade/Goodwill costumes.  They were all awesome.  They were transformed. 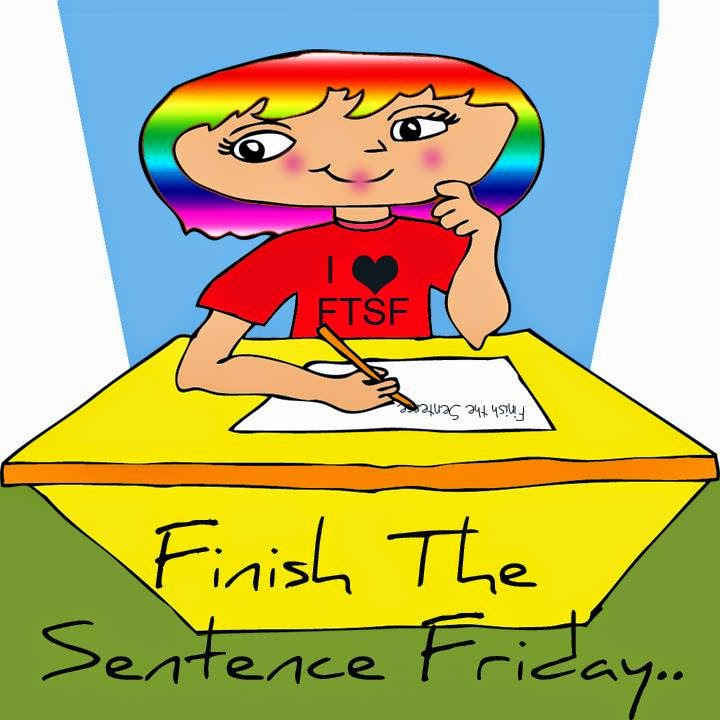 This was part of the Finish the Sentence Friday blog-hop.  Link up at: Finding Ninee

The Great Front Porch Toilet Flush of 2014, or That 101st Cheap Date Idea You've All Been Waiting For

We live in a house with 3 toilets and 4 people.  This is a change from how I grew up, with 2 toilets and 6 people.  So when one toilet--in the kids' bathroom--stopped flushing reliably, we worked on it from time to time, but mostly just said, "Use one of the other bathrooms."  I gave my son a brief (thankfully) lesson in how to use less than half a roll of toilet paper to wipe with.  What can I say?  He comes from a country where the TP goes in the trash, not down the toilet, so he was never taught to conserve, I guess.

Then the guest bathroom toilet stopped working also.  Well, it would work with just water, but not much else.  So now the kids were traipsing in and out of our bedroom every time they needed to go potty, since the master bath had the only remaining functioning toilet.  This prompted the Winemaker to get more serious about fixing the downstairs toilet.  He got an auger and spent a good deal of time swearing at it, to no avail.

Friday we had my twice-a-year miracle, a day I am off work but the kids have school.  Yes, I went back to bed after they left for the day.  When I got up, my husband had made me lunch.  I was blissfully eating and reading, when he walked into the room and said, "You wanna help me fix the toilet?" and gave me a big grin to let me know that he knew exactly how much I did NOT want to deal with anything toilet related.  But I knew he'd already done what he could single-handed, and I did vow for better and for worse, so I said, "Let me finish my lunch," and then went to change into grubbies.

I was dreading it, though.  First, toilet--ew.  Second, the Winemaker is much more intuitive than I am about fixing things, and spatial problems in general, and usually winds up getting frustrated when I am unable to understand what my role is when we're working on something like this.  I am the person that NEVER can figure out how to rotate an object being carried through a doorway so that it will fit. He'll ask for a tool, and unless it's a hammer or screwdriver, I tend to say, "Um, can you describe it?"  It offends my feminist sensibilities greatly, but there it is.  I keep trying though, because I know that if he's asking for my help, he is feeling stuck on his own, and because I keep thinking I might learn something, or develop some confidence.

So there we were, in the tiny guest bathroom, and he got the toilet laying on its back.  Then he looked at me and gravely said, "We should probably put a sign on it so nobody tries to use it."

I thought of how OBLIVIOUS certain members of our household can be and busted up laughing.

And we were off.  I'm not saying there wasn't any frustration, but it was the two of us frustrated with the toilet, not each other.

When we finally decided that the augur wasn't getting everything, we decided to carry the entire toilet out to the front porch and see if we could force out the blockage with a hose.  There's nothing like sitting a toilet down on your front porch to see if the neighborhood is paying attention.  We both had the giggles.  We cranked up the hose and blasted that sucker.

And finally...out popped a color pencil.  If we had approached this job as a miserable chore and a swear-project, the kids would have been in SO MUCH TROUBLE.  But because we'd been treating it as a joke, the pencil was just the punchline.  We contemplated putting it back in their color pencil box and telling them to guess which one had spent a month or more in the toilet.  We started making guesses about what could be blocking the kids' toilet upstairs.  We got the toilet back into the house without me getting us hung up in any doorways, and the Winemaker got it re-sealed to the floor.

"You hear that?"  he asked, and we listened to the water rushing as the toilet flushed easily.  "Isn't that a beautiful sound?"  We grinned at each other.

I'd thought that on our kid-less day we could maybe go get coffee.  How dull!  This took us back to the early days, when just being together made anything automatically exciting.  I remember the thrill of going grocery shopping with him, of spreading barkdust with him, of changing the sheets together.  The task is just a task, but the feeling of being on the same team makes it a good time.

So if you're looking for some unexpected fun with your sweetie--turn your kids loose in the bathroom and take it from there.